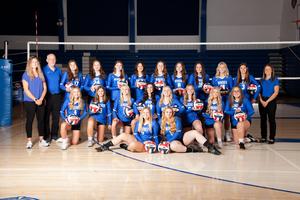 The Windber Volleyball team defeated visiting Salisbury 3 sets to 2 Thursday evening to give the Lady Ramblers their first win of the season.

After losing ten straight games to start the season, the Lady Ramblers were determined to get on the winning side.

Windber began the match facing the prospect of another loss as the Lady Elks won the first two sets. However, the Lady Ramblers put their differences aside, banded together, and worked as a team to win the third set.

It was just the momentum shift Windber needed as the Lady Ramblers ended up winning the fourth set too tying the match at two sets apiece.

Windber battled hard and won the fifth set in convincing fashion by a score of 15 to 6. The team erupted into cheers after the victory. The win improved the Lady Ramblers record on the season to 1-10 on the season. Windber will look to continue adding to the win column Monday when they host Everett at the Windber High School Gym at 7:15.