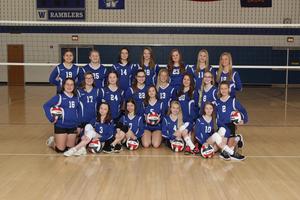 By Veronica Crum
The Junior High Varsity Volleyball team pulled out a successful win against the Penn Cambria Panthers on Wednesday winning 2 sets to 1. Both teams were neck-and-neck during the matches. The winner of the game wasn't clear until the final game was over. All of the girls played hard and managed to win again.

The first match was very intense. The Lady Ramblers had some amazing serves by Mariah Andrews, along with incredible blocks by Paige Strushensky. There were many nice spikes by Noelle Bobak and Mahlon Horner. Karah Ashbrook, Meliah Dusack, and Brianna Barkley had accurate passes to the setter during the first match as well. The game was tied often, with both teams struggling with communication and passes. Windber made some small mistakes let the Panthers take the win 25-23.

The second match was very tight. The girls were determined for a win, and they got it. At first, the Lady Ramblers seemed upset from their first lost, but that disappeared when the rest of the team began loudly cheering on their teammates.  The girls struggled at the beginning, not getting a point until the score was 8-1. But, Windber fought back. The final score of the second match was 25-22, with Windber pulling ahead to snatch the win.

The third match was very intense. Everyone was on their toes to see if the Ramblers could get the win. The Lady Ramblers successfully won the tie-breaker match 15-13, taking a win out of Gallitzin.