Windber Heats Up Against Valley 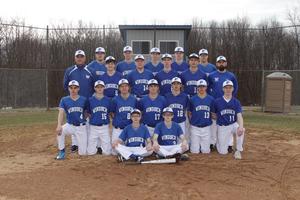 By Jason Tyger
The Windber Varsity Baseball Team topped the Conemaugh Valley Blue Jays Thursday night by a score of 4-0.

The Ramblers’ Chase Vargo started on the mound, and threw an amazing game against a tough team. The Ramblers faced the Blue Jays’ Jake Richards. With a series of big hits, the Ramblers were able to top the Blue Jays for a shutout win.

The Ramblers’ junior first baseman Drew Pheil had 1 RBI with 2 hits, and junior third baseman Cy “Borgie” Saylor had 2 RBI’s with one hit. The Ramblers combined for 6 hits and 3 earned runs.

“We knew we were up against a hard team,” said starting pitcher Chase Vargo, “We came in, handled business, and got what needed to be done, done. Drew and Cy had some pretty clutch hits. Now we just need to focus on Friday’s game.”

The baseball team will take on Claysburg-Kimmel on Friday, April 12th at 4:30 at the Windber Baseball Field.