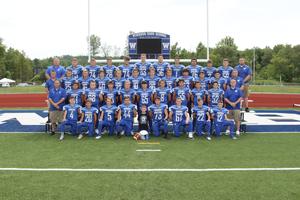 Friday night, the Windber Ramblers faced the Portage Mustangs at the Portage stadium, and lost by a final score of 35-7.

The game started off with a stand off. Both teams seemed evenly matched as both defensive lines held strong. At the 3-minute mark, Portage scored the first touchdown of the game to take a 7-0 lead.

Throughout the course of the second and third quarters, the Mustangs scored three more touchdowns while the Ramblers struggled to get any offense going, making the score at the end of the third quarter Portage 28, Windber 0.

During the fourth quarter, Freshman Blake Klosky finally broke through Portage’s defensive line to score the Ramblers’ first and only touchdown. The final score of the game was 35-7 in favor of the Mustangs.

The Ramblers now have a 2-1 record on the season while Portage improved to 3-0. The Ramblers will play the North Star Cougars at Windber Stadium on Friday. Kickoff is at 7pm, so come out and cheer on your Windber Ramblers.