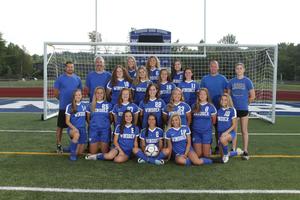 The Windber Lady Ramblers’ beat the Berlin Lady Mountaineers by a score of 4-1 Tuesday night.

The scoring started rather quickly with Windber Junior Natalie Buza scoring the first goal of the game only eight minutes into the match giving the Ramblers an early lead 1-0 with 32 minutes left to play in the first half.

Just before halftime, Buza struck again for the second time of the night. Ending the half, the Ramblers were up 2-0.

Not far into the second half, Buza scored her third goal of the night, and upped the score to 3-0.

Berlin had an answer, though, as they scored with about twenty minutes left in the second half to make the score 3-1.

However, the Lady Ramblers weren’t done. With three minutes left to play, freshman Anna Steinbeck shut the door on the Mountaineers with a goal, making the final score 4-1, with the Lady Ramblers coming out on top.

After the game, sophomore Gina Gaye said, “It was a very good maturity test for us, and we were able to beat a tough team that we beat in the District V playoffs last year.”

The Ladies’ next game is Wednesday night at Conemaugh Township High School against the Indians.