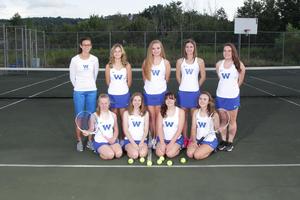 Playing first doubles this match was senior Riley Hanley, who kept the match close but eventually lost both sets 3-6 3-6. Riley had some really great serves.
Second singles was played by senior Kira Labosky. Despite some great backhand returns,she also lost both sets 0-6 3-6.

Third singles was played by senior Baylee Labosky. This was the closest contest of the day as Baylee battled throughout the match. After she lost the first set, she won the second set to force a third and final set. After a heated contest, she lost the third set, 2-6, 6-2, 6-2.

First doubles was played by senior Peyton Betcher and junior Rebecca Wright. They lost both sets 1-6, 1-6. Peyton and Rebeca had great communication throughout the match and continued to work hard as a team.

The next match is Wednesday, September 18th, at 4pm at the Windber Elementary School tennis courts.