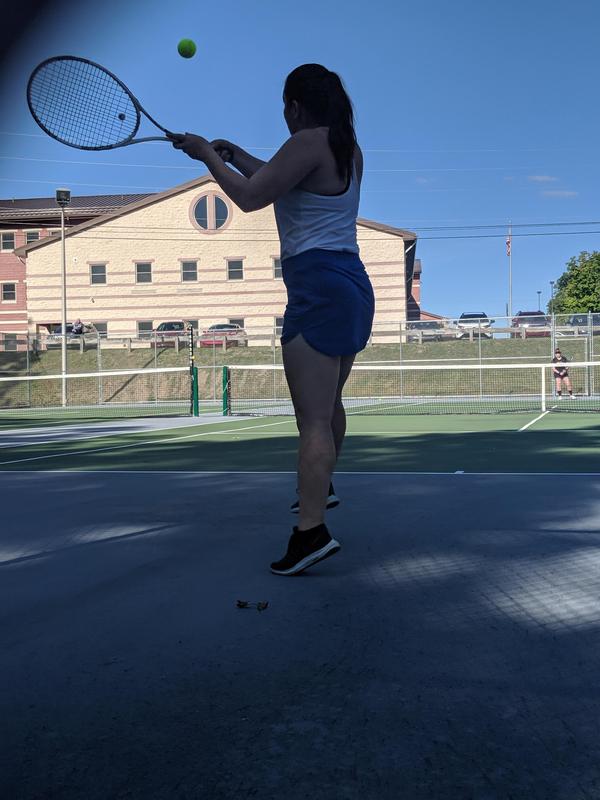 By Rebecca Wright
The Windber Girls’ Tennis team headed to Tyrone on Thursday, September 19th, to face the Eagles and were defeated 4-5 in a tight contest. This was the second time these teams faced each other, except the first match got rained out.

Baylee said, “I felt like I played great. I had some great serves.”

Fourth singles was played by senior Peyton Betcher, and although she had some rallies, she lost. The final results of her match were 1-6, 2-6.

Playing fifth singles was junior Rebecca Wright, who also lost. The final scores for this match was 0-6, 0-6.

First doubles was played by seniors Kira Labosky and Baylee Wojcik. This game was the tie breaking game, all eyes were on the courts during the match.

Before the match, Kira said, “It’s gonna be a great match to watch. We are ready for whatever these girls can give us.”

The doubles team lost the match with the final score being 8-10.

Second doubles was played by senior Peyton Betcher and junior Rebecca Wright. The girls also lost their match with a final score of 1-8.

Peyton said after the match, “We are a little disappointed with the results, but sometimes you just do not get the win.”

The Tyrone match ended with the overall score being 4-5, as the Lady Ramblers took the loss. The next match is on Tuesday, September 24th, at Grier, starting at 3:00.