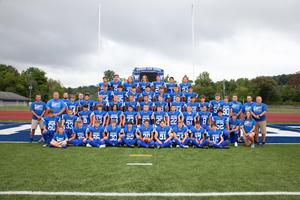 By Jason Tyger
The Windber Football team traveled to Conemaugh Valley this past Saturday and beat the Blue Jays by a score of 44-0.

In the first quarter, Windber stopped Conemaugh Valley on the opening possession, but the Ramblers fumbled on their first snap and gave the ball to the Blue Jays deep in Windber territory. However, the Rambler defense held strong to keep the Blue Jays out of the endzone.

After the stop, senior quarterback Aiden Gray handed it off to Nick Dom who took it 61 yards to the house to give the Ramblers a 6-0 lead.

Early in the second quarter, Gray handed it off to junior running back John Shuster for a 15 yard touchdown, and followed that with a hand off to senior Dylan Tomlinson for the two point conversion putting Windber up 14-0.

Later in the second quarter, Tomlinson would take it in from 53 yards out to increase the lead. Then to end the half, Shuster scored once more to set the halftime score at 28-0.

In the mid-fourth quarter, Shuster ran it into the endzone again, this time from just 3 yards out. To end the scoring, junior Jonah Oiler dashed for a 43 yard touchdown late in the fourth quarter to set the final score at 44-0.

The Rambler defense held strong throughout the game limiting the Blue Jay running game and completing the shutout.

Shuster ended the game with 158 yards with 3 touchdowns on 17 carries. The Ramblers will look to win their second straight game to open the season when they take on the Blacklick Valley Vikings Friday night at Windber Stadium.